The cheaper
the crook
the gaudier
the patter.

Herb Forrest and his wife Wilma are traveling to Tampa, where a new job awaits Herb. They stop for the night in perhaps the world’s sleaziest motel, and, in the novel’s most memorable scene, find their room invaded by Danny and Joy, a couple of speedfreaks. Danny/Joy kidnap Herb/Wilma and force them to participate in the fake kidnapping of Joy, an effort to get a suitcase of loot from Joy’s rich father. On the whole, not bad when one is running out of Brewer novels to read. Grade: C+

Posted by David Rachels at 12:00 PM No comments:

Dying
in the line of duty
is heroic,
but dying
while unemployed
is just stupid.

College is fun
as long as
you don’t die. 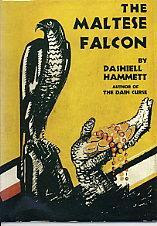 Maybe it’s sacrilege to be thinking of John D. MacDonald while reading The Maltese Falcon, but that’s what I’ve been doing. In 1981, when asked if he were an admirer of Hammett, JDM answered in part, “The prose style of Hammett is certainly a more solid and a more artful style than that of Chandler. But he was an idiot as far as plots are concerned. If you want to drive some high school or college kid nuts, make him do an outline of the plot of The Maltese Falcon. It’s incredibly mixed up and nothing ever happens the way it’s supposed to. But the flow of the narrative is such that you’re caught up in it and you believe it. But you can’t believe it if you try to dissect it.” What I kept thinking as I was reading was how strange it was for JDM to criticize Hammett’s plotting of The Maltese Falcon in the same breath that he was mentioning Chandler. Worse than being “mixed up,” I find the plot of The Maltese Falcon to be patently uninteresting, but Raymond Chandler sets the standard for incomprehensible hardboiled-detective plots. The thing about it, though, as JDM does seem to know, is that with Hammett and Chandler plots may well be beside the point. Grade: A
Posted by David Rachels at 11:41 AM 1 comment: