Nobody’s
a professional
at people. 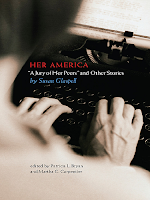 Spoiler alert! The following comments spoil much of Susan Glaspell’s “A Jury of Her Peers.” If you want to read the story, you may do so here.

Though Susan Glaspell’s early noir “A Jury of Her Peers” (1917) has been canonized in Tony Hillerman’s The Best American Mystery Stories of the Century (2001), it is not a mystery story in the conventional sense. Minnie Wright has murdered her husband. No one in the story believes her claim that she slept undisturbed next to him while someone strangled him with a rope, nor is the reader given any reason to doubt her guilt. The only mystery is why Minnie did it. (Significantly, the name “Minnie Wright” never appears in the story. Martha Hale, a neighbor, still thinks of her as Minnie Foster because Martha remembers her as she was before marriage. In all other instances, she is referred to as “Mrs. Wright,” symbolic of the appendage she became.)

The plot of the story proper describes a visit to the Wrights’ empty house as the sheriff (Peters) and the county attorney (Henderson) collect information for the prosecution of Minnie Wright. Peters and Henderson want to interview Martha Hale’s husband, Lewis, at the house, for it was he who discovered the murder. The day before, he had stopped by to see John Wright and was informed by Minnie that her husband was dead. Upstairs, Lewis found the body. The three men are accompanied on their errand by two women. The sheriff’s wife, whose name is given only as Mrs. Peters, is going to gather items that Minnie Wright wants in jail. When Mrs. Peters becomes nervous, she asks Martha Hale to come as well.

Martha feels sympathy for the accused from the outset. When her husband begins talking, she is concerned that he will “say unnecessary things that [will] just make things harder for Minnie Foster.” Thus, she disapproves when Lewis says that he “didn’t know as what [John’s] wife wanted made much difference to John” because this hints at a motive for the murder. Lewis does not follow up on this observation, however, because the attorney asks him to focus on the murder itself.

When the three men go upstairs to look at the murder scene, Martha and Mrs. Peters stay below, and this is when then real action of the story begins. Piecing together evidence that the men are oblivious to (“Nothing here but kitchen things,” says the sheriff), the women come to understand why Minnie Wright killed her husband. First, Martha notices a paper bag of flour only half emptied into a wooden bucket. Then she notices that the kitchen table has been only half cleaned. Then Mrs. Peters notices where Minnie seems to have lost her ability to sew, and she wonders, “What do you suppose she was so—nervous about?” The answer comes, literally and/or symbolically, when they find Minnie’s pet bird, its neck broken, wrapped in a piece of silk in her sewing basket. Earlier, Martha had observed that Minnie Foster was herself like a bird (“Real sweet and pretty, but kind of timid and—fluttery. How—she—did—change”), and now the two women lock eyes “in a look of dawning comprehension, of growing horror.” Literally, the dead bird, along with a birdcage whose door has been forcibly broken, indicates that John killed his wife’s pet. Symbolically, the dead bird shows what marriage to John Foster did to the vibrant young Minnie Foster; as well, the manner of the bird’s death suggests the possibility of spousal abuse.

Though Martha and Mrs. Peters know little about the Wrights’ marriage, they know enough about the naturalistic weight of patriarchy to intuit the details that the dead bird suggests. From their perspective, if the men knew of the dead bird, it “would make certain the conviction” of Minnie Wright. Their sympathy is with Minnie, however, so they will not tell the men what they know. Commentary on the story tends to end here: As a jury, Martha and Mrs. Peters have united in support of their peer. But to stop here is to overlook what may be the story’s deepest irony: While Martha and Mrs. Peters believe that they have the power to prove Minnie’s guilt, they may well be wrong. Throughout the story, the men have treated Martha and Mrs. Peters with condescension bordering on contempt. Just as John Wright did not care what his wife wanted, it seems likely that the men would not take seriously the amateur detective work of the two women. The women’s confidence in their own power, when they may have no power at all, is classic noir.

Posted by David Rachels at 10:59 AM No comments:

I don’t know
why I'm in—
but I'm in it.
It keeps me
in butts and
I see the
country and
I don't have
to slave
over a desk.
I get places.
It's not a
pretty game,
and no guy
every wrote a
poem about it.
But it’s the
only hole
I fit in.

Weep for Me is one of two novels that Gold Medal let go out of print at John D. MacDonald’s request. (The other was 1963’s I Could Go on Singing.) So part of the exercise of reading it is trying to figure out why MacDonald disliked it so much. The set-up is standard Gold Medal fare: Narrator Kyle Cameron is a bank teller . . . actually, that’s probably all I need to tell you about the set-up . . . you know the rest. But the book takes a strange turn in its final act, and its ending is downright embarrassing—I don’t doubt that JDM hated it. He probably found much of its prose embarrassing too. Sample sentence: “They knew that the loins of this dark girl beside me were a trap that had closed on my soul” (98). But you might want to read it simply because JDM doesn’t want you to. Grade: C-
Posted by David Rachels at 5:03 PM 4 comments:

5 Quick Questions with Gerald So

Gerald So is founding editor of the poetry journal The Lineup: Poems on Crime. A distinguished poet in his own right, So holds an M.A. in Creative Writing from Queens College/CUNY.

1. Edgar Allan Poe wrote that “Beauty is the sole legitimate province of the poem,” which raises this question: Can a poem about crime be beautiful?

Crime repulses me, people assuming they have the right to hurt others. To write the honest reactions to crime The Lineup seeks, poets have to deal with hurt, fear, and other forces that would keep them silent. That act of bravery is what I find beautiful.

2. Can a crime poem achieve something that a crime story (or novel) cannot?

Yes. Fictional crime stories and novels are structurally bound to beginning, middle, and end. Any story must establish expectations and meet them. A poem about crime doesn’t have the limitations of fiction. It can spend more time evoking a moment and show most intimately what it means to the people involved.

3. Are there any crime novelists whose writings you find to be particularly poetic?

4. Do you think that The Lineup has attracted readers who otherwise would never have picked up a poetry journal?

I hope so. Crime fiction hooked me on fiction in general, and I hope poetry about crime hooks a new audience on poetry.

5. In your opinion, what’s the single best poem to have appeared in The Lineup?

It’s difficult for me to think of each poem individually after they’ve been published in an issue. I can tell you I like the flow of poems in each issue.

Posted by David Rachels at 6:49 AM No comments:

In the opening pages of Nude on Thin Ice, you can hear the plot gears grind before Gil Brewer gets his machine in gear: Our noir anti-hero, Ken McCall, is summoned to console Nanette Schroeder, the widow of a recently deceased acquaintance. The acquaintance, Carl Schroeder, was a lecherous bastard who didn’t live long enough to spend his fortune. Ken heads to the Schroeder residence with dollar signs in his eyes, but he arrives to find that he is not the only one with designs on the dead man’s money. In the trajectory of Brewer’s career, Nude on Thin Ice is remarkable primarily for its heightened sexual content. Dating to his earliest days with Gold Medal, Brewer was forced to reign in the “perverse” sexual content of his writing, but by 1960 he had considerably more freedom. In Nude on Thin Ice, he doesn’t use that freedom tastefully, but in noir this is not necessarily a bad thing. Grade: B
Posted by David Rachels at 2:15 PM 3 comments:

You may
question
the ethics,
but the results
are good.
Poor morals
perhaps,
but good, sound,
common sense.

Ed Lynskey is an accomplished poet, essayist, and novelist. His novels tend to the noir side. His most recent, Lake Charles, begins with its protagonist waking up one morning to find his girlfriend next to him in bed. Dead, of course.
1. What’s the first crime novel that you remember reading?
The Zebra-Striped Hearse by Ross Macdonald or a John Jericho title by Hugh Pentecost.
2. Hammett or Chandler?
Chandler’s early work is my preference.
3. Gun, knife, blackjack, or hands?
Gun. I don’t like up close and personal.
4. Which noir novel have you read the most times?
The only title I can think of reading more than once is Cain’s The Postman Always Rings Twice.
5. What’s the best novel by Ed Lynskey?
That’s for the readers and critics to decide. I like Lake Charles, my new Appalachian noir because it took ten years for me to finish writing.
Posted by David Rachels at 7:26 AM No comments: