If you want a shining example of a noir novel (re-)marketed in a misleading way, look no further. Published in hardback as Round Trip (a much more appropriate title than Too Many Girls), Don Tracy's 1934 novel tells the up-and-down life story of Eddie Magruder, a newspaper photographer in Baltimore. The book's mode is episodic realism; its highest drama comes when Eddie stands trial for manslaughter. In a novel with a more conventional plot structure, Eddie's trial might have provided narrative arc for the whole affair. As presented, however, the trial is merely one in a string of events that define Eddie's life. The nature of the book's overall drama is indicated by this passing comment from Edith, Eddie's wife: "It would be nice if we could always be happy like this, wouldn't it, Eddie?" This line comes a bit more than one-quarter of the way through the book, and it leads readers to suspect (if they did not already) that Eddie and Edith will not always be so happy. As a whole, then, Round Trip's drama comes in waiting to see what will be their ultimate (and inevitable?) undoing. (And good luck finding all those pin-up models the paperback reprints promise you!) Grade: B
Posted by David Rachels at 8:45 PM 2 comments: 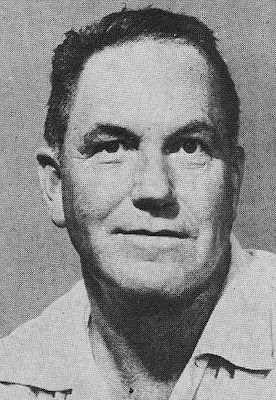 There are not many photographs of noir master Charles Williams on the net, so when I saw this picture on the back of Gulf Coast Girl (Dell 898), I thought I should give it a good scan.
Posted by David Rachels at 7:54 PM No comments:

I recently reread Ryu Murakami's In the Miso Soup, which I reviewed here in October 2008. Here is what I said in that review:

The occasion for my second reading was teaching the novel in a class on American and Japanese noir. Though I think this novel is far from perfect (obviously, given my original review), it nevertheless did seem perfect for this course, which is, in part, an examination of the congruences and differences between American and Japanese cultures, as seen through the lens of noir. In the Miso Soup seemed ideal for this purpose because the novel's Roaming Homicidal Maniac is an American who is (literally) cutting a swath through Tokyo, and the cultural issues raised by an American serial killer in Japan are never far from the forefront of the narrative.

On the whole, my second reading of the novel deepened my appreciation of Murakami's work, as sometimes happens when I have to reread a novel and think about it for the first time as a teacher. Ironically, this is the opposite experience from that which students have traditionally reported in English classes down through the ages: "I liked reading the book, but then when we had to sit in class and analyze it, that just ruined it for me." Responses like this tend to be driven by two factors: (1) bad teachers and (2) students who prefer not to think about what they read. Regarding the second, such students tend to resent even more strongly being made to think about movies, which to them can be sacrosanct to the point that analysis seems a betrayal of the spirit and purpose of filmmaking. ("Why are we trying to find things in movies that aren't really there? Movies are just made for entertainment!") In any case, I hope that I'm managing at least not to ruin anything for my students. In the case of Murakami, Japanese culture is just alien enough to them that the act of analysis perhaps seems worthwhile. Whether I ruined Charles Williams for them, though, is another matter entirely. . . .
Posted by David Rachels at 4:35 PM No comments:

I went over to the sink
and washed up and finally
faced myself in the mirror
on the towel rack.
I looked as if I'd been
shot through a cannon,
was approaching the net,
and knew I would miss it.

A Noirboiled Quiz
Question: How would The Alcoholics be different if it had been written
by any noir writer of the 1950s other than Jim Thompson?
Answer: It would not be in print!
Grade: C-
Posted by David Rachels at 8:19 AM No comments:

Good to see that the word has spread to France to avoid these travesties of publishing. . . . If you know some French, you may be interested to visit Noir Bazar.
Posted by David Rachels at 3:26 PM No comments:

Don Tracy's Criss-Cross was published the same year as James M. Cain's debut novel, The Postman Always Rings Twice. If Criss-Cross had been written two decades later, it would have fit easily into the Gold Medal line. Narrator Johnny Thompson, an ex-boxer who works as a guard for the Laird Armored Car Agency, wants nothing more than the love of femme fatale Anna Krebak, who dates Johnny when he has money, ignores Johnny when he is broke, and makes no effort to hide her desires and motivations: money, money, money. Johnny is no fool—he sees Anna for what she is—but he is still a fool—he cannot leave Anna well enough alone. Anna soon marries an acquaintance of Johnny's, a local hood who has money enough to keep her satisfied, and when the hood becomes ambitious for a big score, his thoughts turn, naturally, to Johnny and the Laird Armored Car Agency. The first half of Criss-Cross is a bit leisurely in pacing, but its second half is strong. Especially worth reading for those interested in the early development of noir. Grade: B+
Posted by David Rachels at 9:58 AM 1 comment:

James Lee Burke's list of his choices for the best mysteries of all time has strangely disappeared from the Parade magazine website, so, as a public service, I am reproducing his list and annotations here. This list suggests, among other things, that (a) Burke may not have read very many mysteries and (b) he may be friends with Ron Hansen and Michael Connelly:

Ron Hansen's Mariette in Ecstasy is a masterful metaphysical story dealing with the stigmata. Ultimately, it's about a woman who represents courage and altruism in the midst of mediocrity.

James M. Cain once said his stories were about the ultimate human tragedy—people getting what they want. Double Indemnity, a 1930s murder mystery involving an insurance fraud scheme, exemplifies his best work.

Mr. Majestyk, by Elmore Leonard, features a farmer who runs afoul of the Mob. It's one of the best portrayals of professional criminals I have ever read and a beautiful accomplishment in terms of dialogue and style.

Selected Tales and Sketches is a collection of Nathaniel Hawthorne's stories, perhaps the best allegories ever written about the nature of good and evil.

The city of Los Angeles is a protagonist in The Black Echo, Michael Connelly's superb tale about Vietnam vets pulling off the score of scores. Connelly writes with the knowledge and experience of a hard-nosed police reporter, but he's also an artist.

Cormac McCarthy's No Country for Old Men deals with evil that seems to have no origin. The writing is spartan, the imagery and dialogue as clean as razor cuts in leather. The story seems derived from the collective unconscious; it is frightening and unforgettable.

Posted by David Rachels at 7:52 AM No comments:

Gil Brewer's Wild to Possess is Everyman noir with an unapologetically implausible plot. Lew Brookbank, a sign painter who has hit the bottle hard since finding his wife and her lover murdered, happens to overhear a man and a woman plotting a kidnapping. (Imagine the kidnapping plot in Fargo, and you're not too far off.) Feeling that he has nothing left to lose, Lew decides to inject himself into the kidnapping in hopes of getting away with the $250,000 ransom. From here, most of Lew's decisions are made with the standard noir justification of there-was-nothing-else-I-could-do. Of course, there are many other things that Lew could have done, as he realizes during his occasional moments of sobriety, but most of the time he is drunk and doesn't give a damn. On the whole, Wild to Possess is fast and entertaining with a number of nice twists and turns, and though Brewer does not find an artistically satisfying way to conclude things, the ending is not bad enough to qualify as a full-blown ruination. Available in a two-fer reprint from Stark House Press. Grade: B
Posted by David Rachels at 2:18 PM No comments:

That's what they really
pay us for—the responsibility,
not for flying the plane.
If they only paid us—say—
six or seven thousand a year,
the passengers would lose
confidence in flying, I think.
It's like psychoanalysts.
They charge fifty bucks an hour
so you'll trust them.
Charles Willeford
The Shark-Infested Custard
c. 1975
Posted by David Rachels at 3:00 AM No comments:

Ours is but a little stay here,
full of sound and fury, and,
if you will pardon the blasphemy,
signifying not a hell of a lot.

Fans of psycho noir will find much of interest in Martha Stout's The Sociopath Next Door. Research indicates that 1 in 25 Americans is a sociopath, which is to say that not every sociopath resembles Lou Ford or Tom Ripley, and psychologist Martha Stout gives a richer portrayal of the sociopathic mind than one can get from noir alone. Noir fans, however, will probably want to skim past Stout's optimistic cheerleading for the future of the human race.
Posted by David Rachels at 7:11 PM 1 comment:

She rolled over
on the bed and
looked at him.
Her mouth broke
into a smile, and
she looked a luscious
armful lying there.
An armful of hell.