only the lucky
ones
are able to
forget

James Sallis
Drive
2005
Posted by David Rachels at 3:00 AM No comments:

I resented the beginning of this novel, was bored by the ending, and was thoroughly entertained in between. Ask the Parrot begins exactly where Nobody Runs Forever ends, with Parker in dire straits, and the defusion of the situation is totally, lazily deus ex machina. The end of the novel dissolves into a gun battle, which I always find to be a particularly anticlimactic way for a Parker novel to wind down, especially given my confidence that Parker is not going to die. In between, which is most of the book, Parker plans a heist while trapped in the middle of a Parker-seeking manhunt, which is, of course, great fun. Grade: B
Posted by David Rachels at 2:32 PM 2 comments: 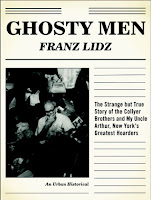 Believe it or not I’ve never bought
a single piece of junk. I found it all
on the street. You’d be surprised
what you find once you look.
Pennies, nickels, dimes,
safety pins, jacks, dice, mirrors,
small bottles, dresser handles,
screws, wire, cord,
mothballs, cigarette packs,
pens that say different things on them,
bullets.

Franz Lidz
Ghosty Men
2003
Posted by David Rachels at 3:00 AM No comments:


The later Parker novels are busier than the earlier ones. The prose remains tight, but the plots have more moving parts, as if Starklake has become an increasingly skilled juggler over the years, and he wants to show off. In Firebreak (two books previous), this busyness felt a bit forced, but in Nobody Runs Forever, this busyness feels much more organic. Of course, Parker is an idiot to see this armored-car job through to its lemony end, but that's true of his jobs more often than not. With only two Parkers to go, I had planned to wait a while before the penultimate (Ask the Parrot), but that may not be possible. Grade: A-
Posted by David Rachels at 2:36 PM No comments:


Spoiler Alert! The following review reveals something very, very important that happens on page 6 of this book. Now, having said that, you may not think that spoiling page 6 can be spoiling much, but I found the image of (spoiler alert!) Parker putting his hands on top of his head and meekly submitting to arrest to be stunning (even though, given the title Breakout, I thought it might be coming). Taken collectively, the first 20 Parker novels (Breakout is the 21st) give the lie to the idea that Parker is good at his job. In fact, what they show is that Parker is extraordinarily lucky. Though Parker is portrayed as a smart, cautious thief, he takes so many outlandish chances in so many treacherous situations that he ought to get arrested every 1.5 books or so. (Indeed, it seems likely that it is impossible to be good at Parker’s job if “good” means “skilled enough to make a career out of it without ever going to jail”). But never mind that. It was oddly thrilling to see it finally happen, and then pleasantly surprising to discover that Breakout entails a series of breakouts—at least three, possibly more depending on what you think qualifies. My only regret about this book is that Starklake feels the need to have his characters joke about the fact the first (jail)breakout has simply created situations for further breakouts. Readers could have been trusted to catch on to that. Grade: A
Posted by David Rachels at 10:46 AM 1 comment:


From her eyes
wrinkles ran down
to the corners
of her mouth,
the scars of
ancient tears.

Redheads Die Quickly and Other Stories (ORDER NOW!) collects the best stories from Gil Brewer’s glory decade of the 1950s:


If you’re a Gil Brewer fan
and you do Facebook,
please join us
by following
the link below. 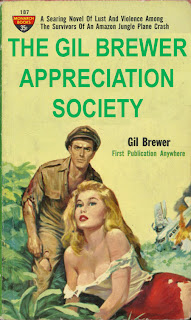 Posted by David Rachels at 12:49 PM No comments:

Firebreak begins with two plot threads—Parker planning a heist, Parker trying to figure out who wants him dead—that Starklake soon ties together. The heist, involving stolen art secreted away in an isloated mansion, is a good one, and just when you think the plot has stablized, complications invariably arise. My only complaint about Firebreak is that the jack-in-the-box appearances of some complications feel artless. In particular, the inclusion two men on the job—Harry Corbett and Bob Dolan—desperate for money so that they can skip on bail only distracts from a solid entry in the Parker series. Grade: B
Posted by David Rachels at 9:53 AM No comments:

SHIRLEY LOCKS! SHIRLEY LOCKS
WILT THOU BE MINE?
THOU SHALT NOT SCREEM
NOR YET FEE THE LINE
BUT LAY ON CUSHION
AND THINK OF ME AND DEATH
AND HOW ITS GOING TO BE.